The Bad Battery life isn’t much better than last year’s iPhone 5S. An even larger screen could have been squeezed into the same housing.

The Bottom Line The iPhone 6 is an exceptional phone in nearly every way except its average battery life: it’s thin and fast with a spacious screen and the smoothest payment system we’ve seen. It’s the best overall phone of 2014.

For years, Android phones have shipped with displays in expansive, 5-inch-ish sizes, but Apple had insisted on the necessity of a small screen for one-handed operation. The iPhone 5S, while powerful, hit a wall in viewing room: its 4-inch screen was among the smallest on the market, and, frankly, I found it limiting.

Apple now has two larger iPhones: one big, the other even bigger. The iPhone 6 sports a 4.7-inch screen, while the iPhone 6 Plus goes full “phablet” with a 5.5-inch display. Compared to earlier iPhones, both of the new models boast thinner bodies, ship with faster A8 processors, slightly improved cameras, speedier Wi-Fi and LTE cellular data, better voice quality if you’re using voice-over-LTE, and — except in the entry-level models — more onboard storage. And like all current iPhones, these are running iOS 8.1; it’s a far less revolutionary update than iOS 7 was, but it adds some nice improvements and customization options, including notification widgets, replaceable keyboards, a new Health app and Apple Pay. 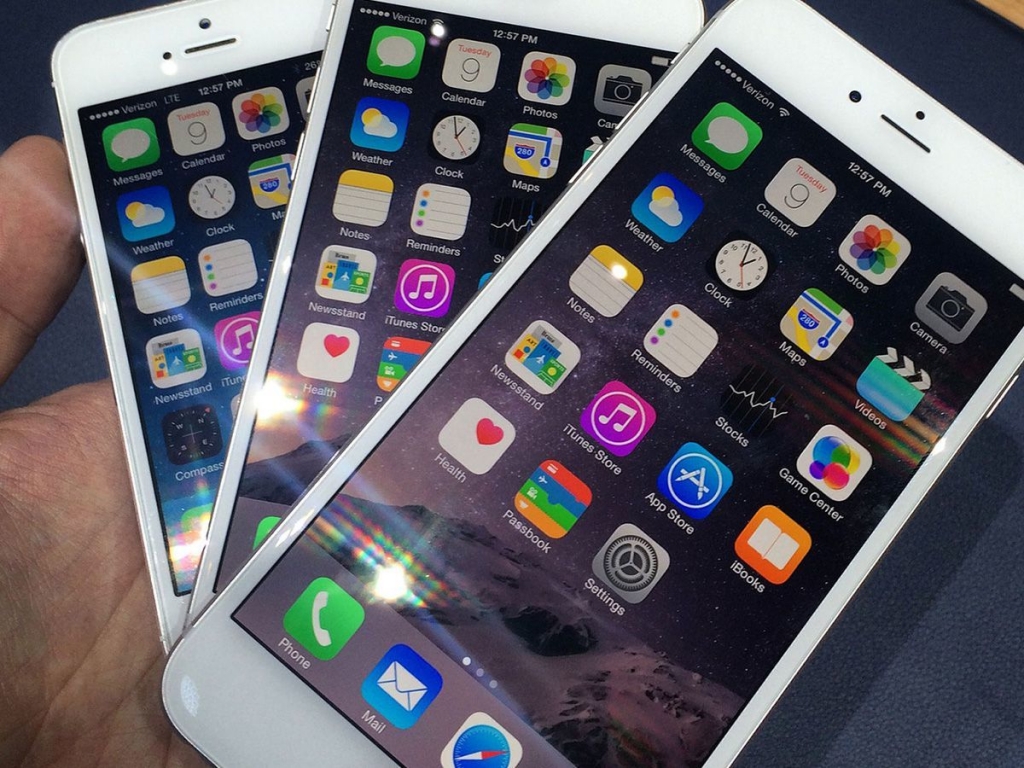 iPhones have always had phenomenal displays, both in terms of brightness and color quality. AfterCNET’s display testing, we found the iPhone 6 and 6 Plus screens to be better than previous iPhones, narrowly. Grayscale and contrast levels are better, while color accuracy remains about the same. We still found OLED displays like those on the Samsung Galaxy S5 had more vivid contrast and slightly richer, if less accurate, color.

A grid of six-by-four apps now fits on each page plus the four in the dock below, for 28 total; on the 5’s 4-inch display, it’s 24. There are more pixels horizontally and vertically, unlike the merely vertical lengthening of the iPhone 5. That also means the aspect ratio is the same (16×9), and videos and Web pages scale similarly.